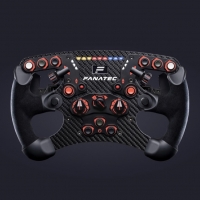 I am fully aware and appreciate there is a lot of information (and misinformation) on this subject out there - primarily that this is a Microsoft/ XBOX issue where ‘wheel mappings ﻿are only allowed to that of XBOX controller inputs’.

I accept it probably was the case historically, BUT see below...

I﻿ had a Logitech G923 (recently upgraded to Fanatec) and All (you read that right) - ALL button/dial input﻿s and rev lights on that G923 wheel ARE SUPPORTED in Assetto Corsa Competizione on XBOX - SO THERE CLEARLY IS A WAY to get most buttons on our Fanatec wheels working for our beloved F1 games...﻿

Demonstrably, the above is allowing mappings well beyond the number of standard controller﻿ inputs, rendering that old chestnut;﻿﻿ ‘Microsoft limits mapping to that of it’s controller inputs’ as null and void - at least in my mind.﻿﻿﻿﻿﻿﻿﻿﻿﻿﻿﻿

Does it mean the Microsoft castle wall has been breached and we can now expect better Fanatec wheel button support in future F1 releases? Or was this a one off?

I’m﻿ by no means a software development expert (and please correct me if you DO ﻿KNOW), but I assume this was achieved via Microsoft OK’ing, and ACC game developers then usin﻿g,﻿ the new Logitech SDK to s﻿u﻿pport True﻿﻿f﻿o﻿﻿rc﻿e.﻿ ﻿

I also accept that Fanatec may not know what has been achieved by other wheel manufacturers - so if Microsoft are telling Fanatec that inputs can only be mapped to XBOX controller inputs, (which is proven not to be true) then the knowledge that Logitech have done it can be used to leverage Microsoft.

﻿A few questions then; What do Fanatec/ Codies need to do with their software to achieve ﻿better button support and what are the current roadblocks? What is in the pipeline on this for Fanatec wheel - does anyone actually know? ﻿

I am posting this as it is important to know what has been achieved, which could hopefully c﻿ould lead to a better result for all Fanatec wheel users on XBOX.

P.S. Happy to be corrected on any of my assumptions and thought﻿s above.

P.P.S. Yes I know I “should” be on PC to unlock all functionality (I will get there eventually if this can’t be solved), but that’s not the point - my Fanatec wheel is officially XBOX licensed and SHOULD work. And with the above development I see no reason as to why this can’t be achieved, especially as the Fanatec equipment is expensive!