I've been having some sudden stability issues with my CSL DD wheelbase and I'm posting here because all other methods of contacting support have failed (more on that later).

So anyway, yesterday, while I was actively using my CSL DD in-game, it suddenly lost connection to the PC. When this happened, the Fanatec Firmware Updater software was displayed, and the status light became yellow permanently. The PC, Fanalab, and FanatecControlPanel cannot detect the connected wheelbase when it's in this state, and the unit is unusable.

Sometimes, it will resume normal operation after power-cycling and swapping steering wheels multiple times. However, after about 5-10 minutes of use, it loses connection again, displaying the yellow status light. I run both a ClubSport Universal Hub V2 and a ClubSport Steering Wheel Formula V2, and it makes no difference which one is connected. After a few minutes, the wheelbase loses connection with the PC.

After the initial incident, I upgraded the Fanatec driver to 434, but it did not resolve the issue. The only difference I've noticed is that the status light blinks yellow/blue when the unit loses connection instead of solid yellow.

I've also observed the wheelbase unit will reconnect to the PC if I do not have a steering wheel mounted, but the connection is lost when I connect either of my wheels.

The pictures below are three different message logs that are displayed when the updater automatically pops up after the wheelbase loses connection.

So I tried 10+ times to create a support ticket for this, but I get a "Please enter a message and a subject" error every time. I attempted using 3 different PC web browsers and an iOS device with the same result. Gave the live chat a try last night, and it initially told me in first in line and then failed to connect after a minute or two. 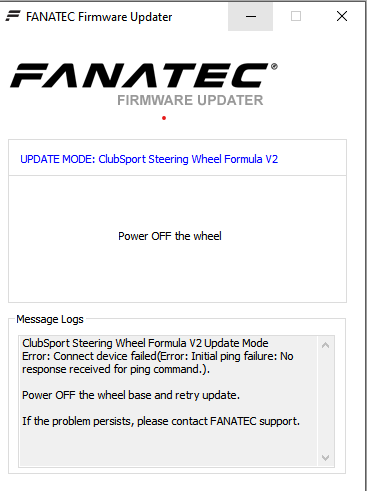 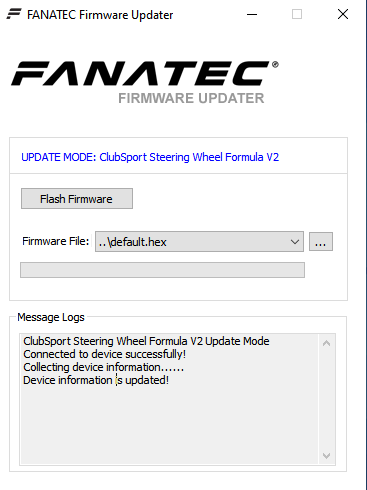 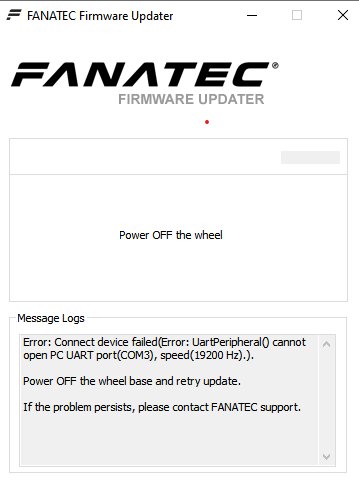