R300 podium relabelled as pc only after purchase?!?!?! 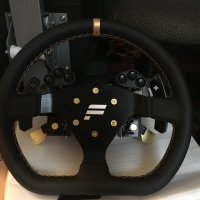 Jason Pascale
May 8 in Steering Wheels

Bait and switch! I just bought a dd1 ps4 podium setup. I didnt even want the f1 rim to begin with as i play rally games. Fanatec forced only ps4 players to buy this rim while at the same time not allowing us to buy a dd2 setup. The only round wheel available that was labeled as ps4 compatible was the r300 podium. I buy the wheel for $500 extra dollars just to get a round wheel cause not everybody likes f1 Wheels regardless of a big licensing deal with sony. I get the wheel set it up and find out that the wheel is no longer classified on fanatecs website as being for ps4... it is now labelled pc only. So the conpatible wherl is not compatible... This is beyond a bait and switch and i did not spend $500 extra on topof being forced into an f1 wheel just to be told it is not compatible. I think its time for @fanatec to answer for this wheel being labelled as ps4 compatible... And i refuse to keep a $500 paperweight while i “wait for fanatec to figure it out”. Does anybody have a solution or is it time for me to dispute this purchase with my cc company as ive been sold an expensive product inder false pretenses?